A Brief History of the Toowoomba Diocese 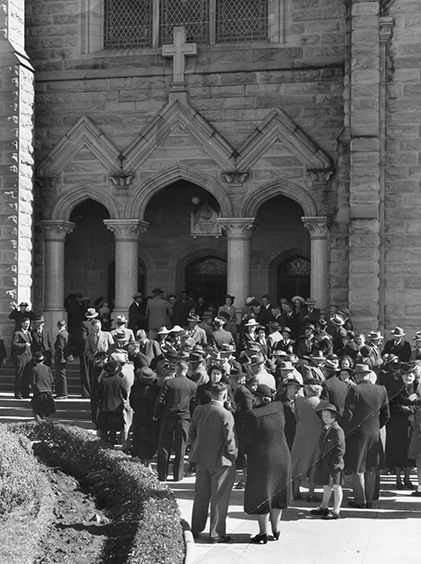 Mary of the Southern Cross: Patron of the Toowoomba Diocese

In 1997 the Diocesan Liturgical Commission (DLC) undertook a search to discover whether a Patron had been established for the Diocese. The Ordo (the book that sets out the celebrations for a diocese, region or country) began acknowledging Diocesan Patrons in the 1980’s, but nothing was listed for Toowoomba. Searches of the archives of the Diocese, the Apostolic Nunciature and the appropriate congregation in Rome failed to find record of the establishment of a Patron.

The DLC then proposed that we seek the approval of the Holy See for Mary, under the title of the Southern Cross, to be established as our Patron. The DLC sought comment from across the diocese explaining the history of the title and setting forth reasons why it was thought to be an appropriate choice for the diocesan patron.

The first celebration of the Feast of Mary of the Southern Cross, as the Diocese has chosen to refer to it, took place on 1 September 1999. A day of solemnity across the Diocese, the date is significant to our Diocese for many reasons.  It is the anniversary of the taking possession of the Cathedral by our first bishop, James Byrne.  It is also eight days before the Feast of the Birth of the Blessed Virgin Mary and therefore would create an octave, it is the first day of Spring, and no other feast is celebrated in Australia on this day.

The Patronal Feast is a day on which we especially pray for the whole Toowoomba Diocese and recall that it is through the diocese that we are brought into communion with the universal Church. This Feast is especially ours and is an opportunity to renew our bonds as a diocese. 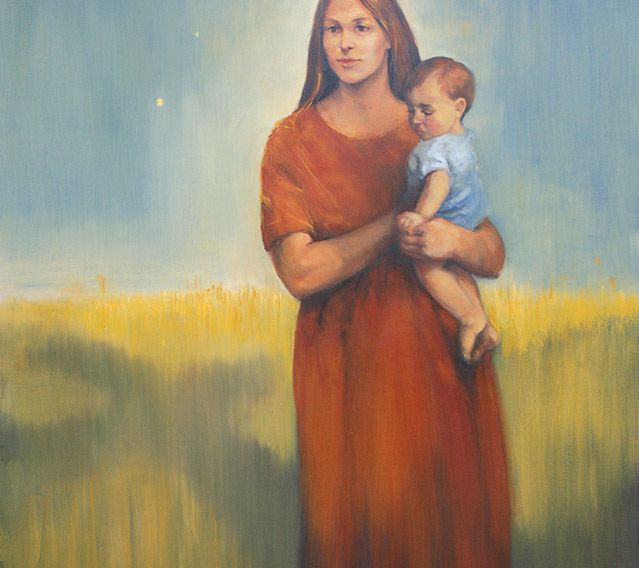 Mary of the Southern Cross Portrait

A Word from the Artist: Jan Williamson’s life sized portrait in oils depicts Mary as a rural woman standing with the child Jesus in what might be considered a wheat field. The infant Jesus is dressed in a romper suit, as any child today might be. Mary is wearing a simple brown dress.

Mary’s face is serene, yet possessing of a great strength. It could be the face of an Aboriginal woman, or even the face of a European migrant. It is a face that might be described as universal. 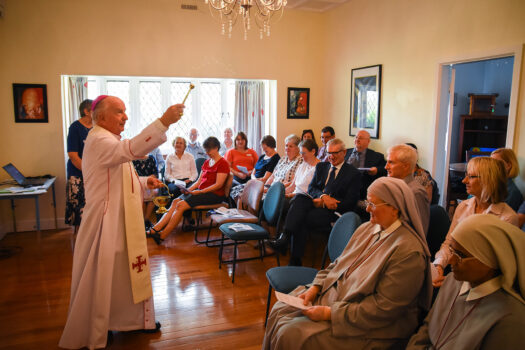 Sychar House of Prayer and Spirituality is blessed and opened. Sychar was created to respond to a need for a diocesan space that would help people discover inner growth and spiritual nourishment. It is for those who seek to discover..Read More 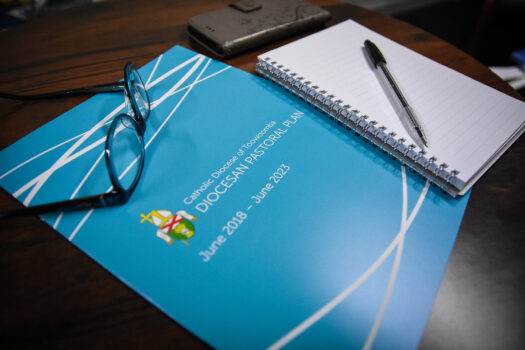 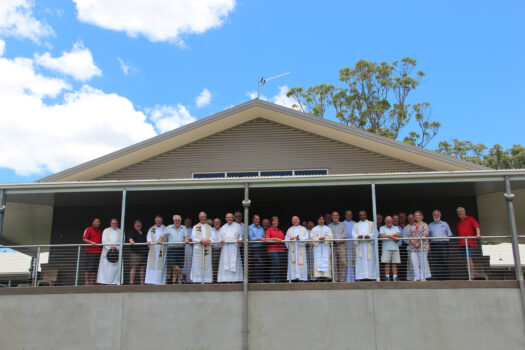 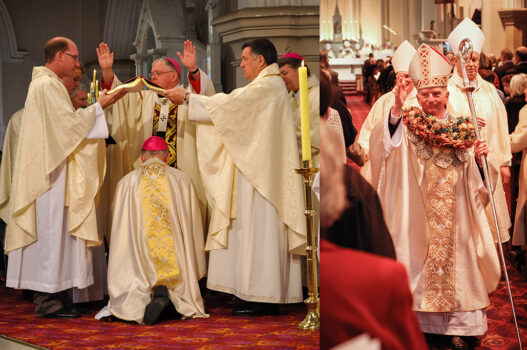 Most Reverend Robert McGuckin is consecrated as sixth Bishop of Toowoomba at St Patrick’s Cathedral, Toowoomba. 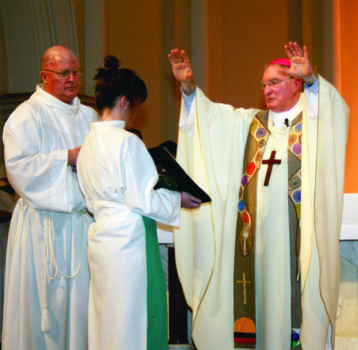 The Diocese of Toowoomba celebrated its eightieth anniversary

St Columba’s School and St Mary’s College in Dalby combine and open as Our Lady of the Southern Cross College.

The Feast of Mary of the Southern Cross is first celebrated. The day is a solemnity across the Diocese. The date of September 1st was chosen because it is the anniversary of the taking possession of the Cathedral by our..Read More

After a short illness, Bishop Edward Kelly dies at Currumbin Hospital, aged 77 years. He is buried in the Toowoomba Lawn Cemetery. 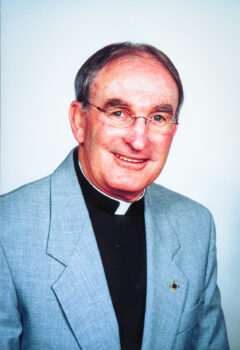 Most Reverend William Morris is consecrated as fifth Bishop of Toowoomba at St Patrick’s Cathedral, Toowoomba.

Bishop Edward Kelly was awarded an Honorary Doctorate of Letters from the University of Southern Queensland.

Upon his seventy-fifth birthday, Bishop Kelly notified the Holy See of his retirement and moved to Tugun.

Concannon College at the University of Southern QLD is completed. The college was built in the honour of the Concannon family, particularly Monsignor Edward Concannon for his devotion to youth and education in Toowoomba. The College is managed by the..Read More

The Dining Hall is opened at the James Byrne Centre.

The Main Accommodation Block is opened at the James Byrne Centre.

The Marian Hall is opened at the James Byrne Centre.

The James Byrne Centre, named after the first Bishop of Toowoomba, is opened.

Construction begins on the James Byrne Centre – the Chapel and Sanctuary House. The retreat centre is a project initiated by Bishop Kelly. 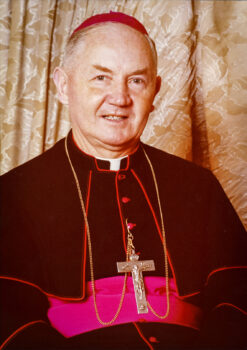 Bishop Edward Kelly is installed as the fourth Bishop of Toowoomba at St Patrick’s Cathedral, Toowoomba by Archbishop Francis Rush of Brisbane. 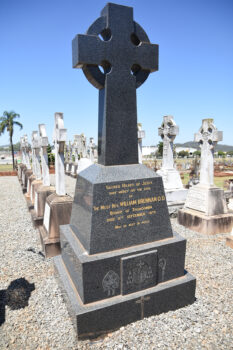 After a long illness Bishop William Brennan died and is buried in the Drayton Cemetery in the diocesan plot.

Most Reverend Edward Kelly was consecrated bishop at St Mary’s Cathedral, Sydney, and took responsibility for the western region parishes of Sydney. That same year he also held the position of Auxiliary Bishop to Cardinal Gilroy.

Sacred Heart School Toowoomba opened with 22 children. School was conducted in a wooden building donated by the Sisters of the Sacred Heart. 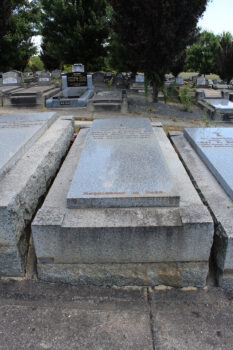 Bishop Joseph Roper dies and is buried in Ararat.

St Joseph’s College was established by the Christian Brothers to educate boys from Years 5 to 10. In 1983 the school phased out the primary school classes, extended to years 11 and 12 and became co-educational.

At the direction of Bishop Brennan, and in the face of some spirited local opposition, the presbytery of Tannymorel was moved to Killarney which then became the centre of the parish.

Foundation Stone laid for St Anthony’s Primary School Toowoomba and the first classroom was ready for use by February 1955. 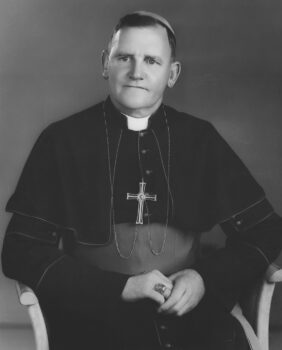 Most Reverend William Brennan was consecrated Third Bishop of Toowoomba by Cardinal Gilroy, then Archbishop of Sydney, at Holy Family Church, Parkes. He took possession of the Diocese on 8th November.

Due to failing health, Bishop Joseph Roper tended his resignation to the Holy See and left Toowoomba for Ararat, Victoria.

St Maria Goretti School, Inglewood is blessed and opened by Bishop Roper. The school is founded by the Sister of St Joseph.

Parish of Toowoomba West, Our Lady of Lourdes, established.

Inglewood and Yelarbon separate from the Texas parish.

Robert McGuckin was born in Marrickville, Sydney. His parents John and Gladys are now both deceased, as is one of his four siblings. His family comprises his eldest sister Janice, his elder brother Edward and his younger brother Patrick and..Read More

Edward Kelly was ordained at St Mary’s Cathedral, Sydney after entering the Novitiate of the Missionaries of the Sacred Heart at Douglas Park, and continuing his studies at the Gregorian University, Rome. He obtained his Baccalaureate in Sacred Theology and..Read More 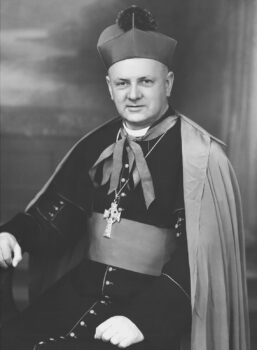 Most Reverend Joseph Roper was consecrated Second Bishop of Toowoomba by Archbishop Daniel Mannix in St Patrick’s Cathedral, Ballarat. He took possession of the Diocese on 20th November. 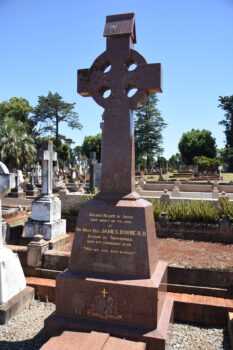 Bishop James Byrne became very ill in 1935 and underwent a major operation in the Mater Hospital in Brisbane. In 1938 Bishop James Byrne died aged 67. He is interred in the Toowoomba/Drayton Cemetery in the Diocesan plot.

A school is opened by the sisters of St Joseph in St George. 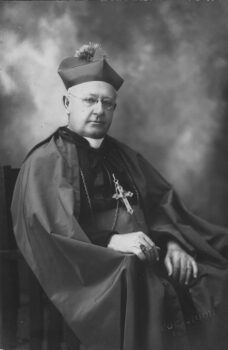 The Holy See issues a decree erecting Toowoomba Diocese – fifteen parishes and twenty priests. When the Diocese was founded it covered all the territory in the southern part of Queensland south of the twenty-fifth degree of south latitude and..Read More

Church at Chinchilla blown down by a mini twister. By 1926 it was replaced by a wooden building, which in 1962 became the Parish Hall. The present brick Church was completed in 1962.

Archbishop Duhig laid the foundation stone of the school of Mater Dei School Toowoomba, then known as Holy Angels.

Edward Francis Kelly was born in Wellington, NSW. He was the ninth of Denis and Elizabeth Kelly’s ten children. For education opportunities, the family moved to Sydney, and there Edward attended several schools, completing his final years through the Marist..Read More

The Catholic School Community in Pittsworth was founded by the Sisters of St Joseph. The school commenced as St Joseph’s Convent.

Heldon Parish was established. In 1942 the boundary between Toowoomba Diocese and Brisbane Archdiocese was altered to a line just east of Grantham and Helidon became part of the Toowoomba Diocese.

The sisters of Mercy set up St Mary’s School and Convent, Charleville was blessed and opened. The school and convent was set up by the Sisters of Mercy.

Joseph Roper is ordained at St Mary’s Cathedral, Sydney. He studied in Manly.

St Mary’s School Goondiwindi was opened in by the Sisters of Mercy.

William Joseph Brennan born at Dulwich Hill, Sydney. His early education was spent with the Sisters of St Joseph at Dulwich Hill and the Christian Brothers at Lewisham.

The Sisters of Mercy begin teaching at the site of Holy Name, then known as the Mort Estate.

James Byrne was ordained by Bishop Croke of Cashel at the St Patrick’s College.

Joseph Basil Roper was born in Dennington (near Warrnambool), Victoria. He attended the Sisters of Mercy School in Warrnambool, then transferred to the Christian Brothers in 1901.

The first church was built in Charleville and called St Joseph’s. In 1915 the first Presbytery was destroyed by fire and a new Church, the first to be named St Mary of the Assumption, and Presbytery were built. Within a..Read More

St John’s School, Roma was established by the Sisters of Mercy

St Columba’s School was established by the Sisters of Mercy to provide Catholic education for the children of Dalby and district.

Sisters of Mercy arrive in Stanthorpe. The convent, which now forms part of the Secondary Campus of St Joseph’s School, was opened and blessed by Bishop Byrne 17th April, 1932

The first Catholic church in Dalby was built. When the walls of the church were nearly completed, a severe storm struck Dalby and the half-finished church was destroyed. However, the building was later completed. The current brick Church’s foundation stone..Read More

St Patrick’s Church School is opened in Toowoomba. In 1938 Bishop Roper renamed the school The Cathedral School. In 1959 the school was renamed St Saviour’s School, taking the name of the convent where the Sisters of Mercy lived.

Our first resident priest to the Downs, Fr Fulgentius Hodebourg, was appointed. We were called the Toowoomba Mission, and other `Mission Centres’ like Warwick, Roma and Charleville were gradually established. Clergy on horse would travel vast distances to say Mass..Read More

Dr James Quinn is appointed the first Bishop of Brisbane. Prior to Toowoomba being established as a Diocese, we came under the auspices of Brisbane.